Shares of Appian (NASDAQ:APPN) spiked 324% last year, according to data provided by S&P Global Market Intelligence, as investors looked to technology stocks as a haven for their money during lockdowns and social distancing.

Appian’s platform allows customers to easily and quickly build apps without having to know much about writing code. And as the pandemic forced companies to focus their attention on attracting and communicating with customers online, many companies turned to Appian to build their apps last year. 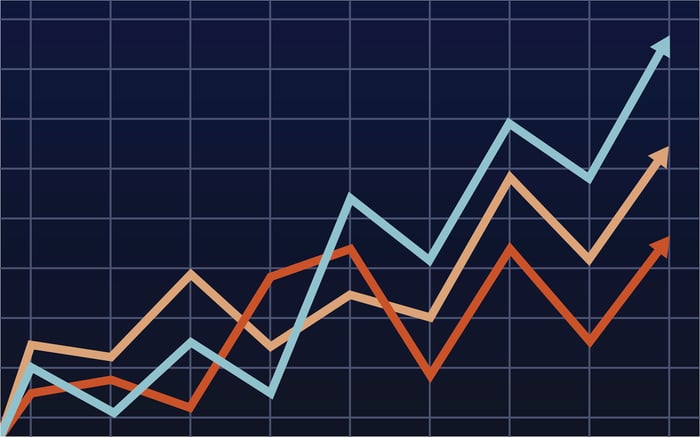 The demand for an easy app-building service pushed up Appian’s cloud subscription revenue, which increased 40% in the third quarter. In turn, the company’s total revenue increased 17% in the quarter to $70.9 million, and adjusted earnings per share reached breakeven, outpacing Wall Street’s consensus estimate for a loss of $0.17 per share.

Appian’s growth in the third quarter, and its revenue and earnings beat, spurred investor sentiment in the stock and caused its share price to jump 121% in November.

Investors were also likely optimistic about the company as demand for mobile apps increases. The mobile app market was worth $106 billion in 2018 and could grow to an estimated $407 billion by 2026.

Appian’s management has issued guidance for the full-year 2020, with cloud subscription revenue estimated to increase 34% to about $127.5 million. And it said on the third-quarter earnings call that 2020 sales will be $296.5 million at the midpoint of guidance, which would be an 11% year-over-year increase.

If the company continues to build its cloud subscription sales, and tap further into the demand for mobile apps, Appian could continue to see growth in the new year.